That's what this season is all about! Call them hopes or wishes: Kids write their wish list, you may have hopes of a peaceful and festive family Christmas.

But what it really comes down to is expectations. And when our expectations are not met, we are disappointed.

In the Christian tradition, the season before Christmas is called Advent, which means "coming" or "arrival." As Christians, we expect, we hope for the coming of our Savior, Jesus Christ. We expect we hope for him to change the world and make it better. We don't celebrate Christmas to commemorate something that happened a long time ago. We celebrate Christmas because of the hope it brings us: God came into this world as a human being! Small, frail, poor. God came to be with us, to be like us, and to show us how to live and how to love.

The reason we still celebrate this is that we still have hope that the world can change. That we can change and live the way Jesus did. Even thousands of years later, we still have that hope. Without it, everything we do would be pointless and meaningless.

Not only do we have that hope, but we also have the expectation. Expectation is a little more certain than hope.

Having expectations of our family or of ourselves may lead to disappointment.

Having expectations of God never will. In God's time, God will bring what we have every right and reason to expect of God: Peace, love, justice.

I'm counting on it!
Posted by Trinity Church of Northborough at 9:57 AM No comments:

As we're getting closer to Thanksgiving I've seen people post something they are thankful for every day.

A friend and I have been exchanging our daily moments of gratitude via text message.

And every night before I go to sleep I try to think of three good things that happened to me that day. Because our brains tend to focus on the negative. They are like Velcro for negative experiences and like Teflon for positive ones. The negatives stick, the positives slide right off. It's an evolutionary trait: The brain needs to be alert and respond to threats quickly. This was from a time when every living being had to fight every day just to survive.

As humankind, we have evolved from that (for those of us who are fortunate enough to live in safety), but our brains have not. So we need to be intentional about focusing on the positive. That's why it's good to acknowledge three good things that happened on any given day, to balance out the negative.

This doesn't mean denying that bad things are happening in the world and possibly in our own lives. It just means we look at them with a different attitude: An attitude of gratitude. What's my opportunity here? What can I learn from this, how can I grow? Is God trying to tell me something that I need to hear?

In ancient Christian tradition, November is also the time to remember those who have passed on, and to face our own mortality: This life is not forever. Nobody will be around forever. Not to sound morbid, but this always helps me put things in perspective: What is really important? Where do I want to invest my energies? What do I want to work for, and what can I possibly let go because in the grand scheme of things it just doesn't matter? Who are the people that I want to surround myself with, and who do I need to distance myself from?

Thanksgiving is a chance to take an honest look at our lives, and to focus on the good. On the blessings that God pours out on us every single day. Especially in times like these. Look for the good. Look for kindness and compassion, and you will find it. Thanks be to God!

Posted by Trinity Church of Northborough at 10:39 AM No comments:

Last Friday, a community group in Westborough (one town over from us) organized a friendship circle for their Jewish neighbors: They invited everyone to come and stand outside the doors of Congregation B'nai Shalom and greet worshipers as they were coming in for Shabbat services.

Originally I had not been planning to attend since we had a church event that evening. But something compelled me to go. Was it the pouring rain that made me think nobody else would show up? Was it my desire to do something, anything, after the horrible news of the shooting of 11 worshipers at the Tree of Life Synagogue outside Pittsburgh two weeks before? Was it the 80th anniversary of Kristallnacht, the night when Jewish stores, synagogues, cemeteries and homes were burned to the ground in Nazi Germany?

In any case, I went. First I couldn't find parking at the school next to B'nai Shalom where we were meeting. Then I saw a long line of people walking. Hundreds of them. The rain didn't stop them from showing up!

We were invited inside and formed two lines in the hallway. Worshipers walked past us to their worship space as hand-written notes were handed to them. Some of them had tears in their eyes, others were seriously crying. They were all overwhelmed and deeply moved by the number of people who showed up. So was I.

This is how much "showing up" means. And if I hadn't shown up, I would have missed out on a powerful experience of solidarity and hope.

When did it ever matter to you that someone showed up? At the hospital bed? At a grave site? For your wedding or birthday party? For your kid's concert or game? Didn't it mean the world to you to see them take time out of their busy lives and be with you?

And my next question is: Where can you show up and be present for someone else in their joy, or in their sorrow? Maybe you've done so recently and experienced how gratifying it is. Maybe you want to but something always got in the way.

In times like these, we need each other to show up. To be there. To show solidarity and support. It means the world, and quite possibly, it could save the world.
Posted by Trinity Church of Northborough at 9:52 AM No comments: 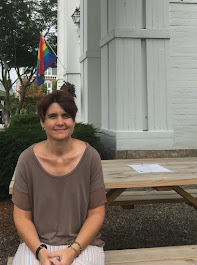